A dream road trip through the mid-West, finishing in New Orleans? Sounds good, but, what’s exciting about that? Did we mention it was a haunted road trip? Sign us up! It all started with friends of ours from Midlothian Paranormal Investigations out of Edinburgh, Scotland, wanting to take a dream road trip in the USA. Together, with Mark and Aileen, we concocted a fantastic line up: Cincinnati Ohio, Louisville, Bardstown and Vine Grove Kentucky, and Hurricane Mills Tennessee, with some of us going on to New Orleans.

Sadly, Mark had a major health scare the day before he and Aileen were due to leave, so they couldn’t join us. The good news is that he’s recovered nicely, and is doing better than ever. Dare I say he even quit smoking? Without them, we needed to make a few modifications. Our dream team as it were for this investigation: Lisa L., Tammy Lynn X., Ross A., Michael X, Nick X., and myself. As with most investigations, there wasn’t much sleeping in between locations, but I’ll do my best to share our adventure through that sleepless fog I still see the trip through. Without further ado, here’s AGHOST’s Dream Haunted Road Trip.

After a sleepless all-night flight, Lisa and I met Ross and Michael at the Cincinnati airport. We made sure to stop at the Waffle House—what? We don’t have them in Seattle! The Cave Hill Cemetery in Louisville, Kentucky where Mohammed Ali was buried, was first on our list. Tammy Lynn met us there. This cemetery is the size of a small state, so it took forever to find his grave. 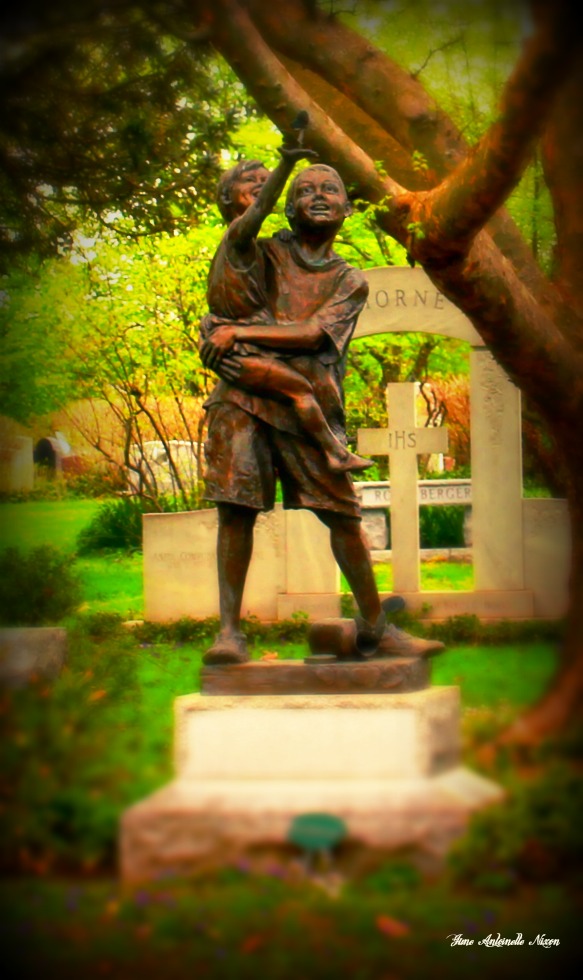 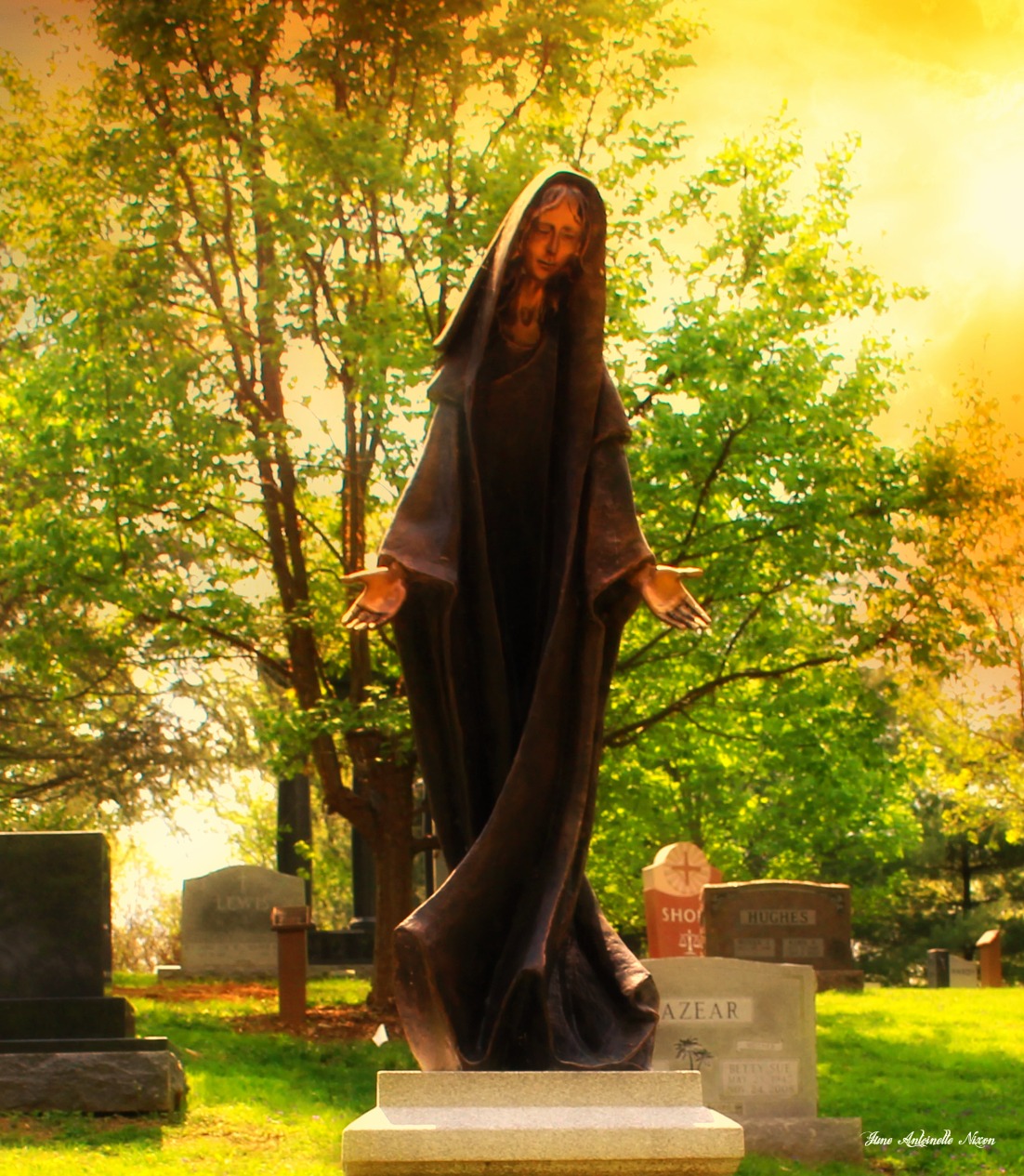 Next up, after checking into our hotel for a quick nap, was Waverly Hills Sanitarium for an all-night investigation, where Michael’s brother Nick joined us. Side note: I have seen this place on every single ghost and history show, so it’s been on my bucket list for a long time. On a few of the ghost shows they said that over the years, 56,000 people died there. Since then, I’ve learned the number was pretty inflated: it’s more like 8,000. Though that number is still horrifying, it’s a little easier to swallow.

While we waited for someone to come down to guide our car to the Sanitarium, the parking lot filled up with more and more people. It’s challenging to get uncontaminated footage even with a handful of investigators, so with each person, my heart sank further. I was worried we wouldn’t know if anything we found would be a ghost or some other person talking or whispering. I told myself to suck it up and just be there for the experience and the adventure, even though I’d cringe every time yet another car drove up. Finally, we drove up to the main entrance. And then, it was right there in front of us. Seeing the Sanitarium in real life gave me goosebumps. 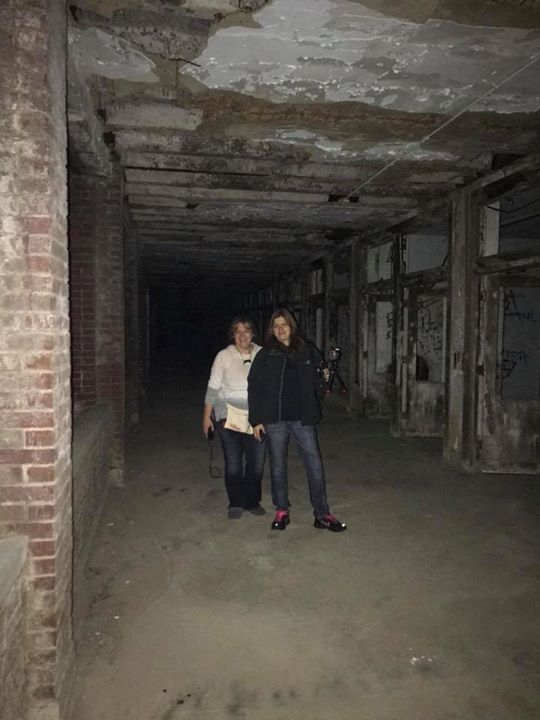 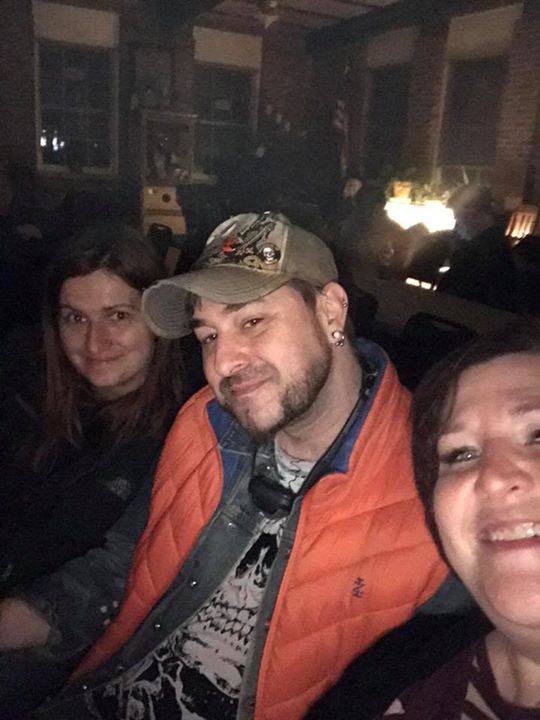 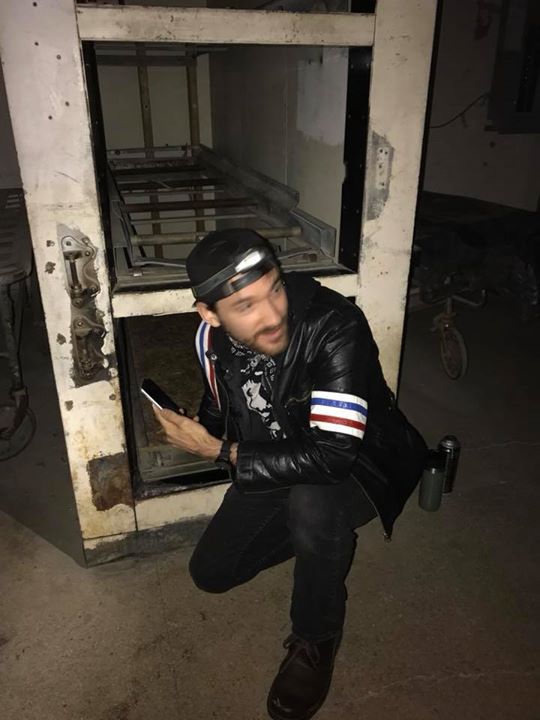 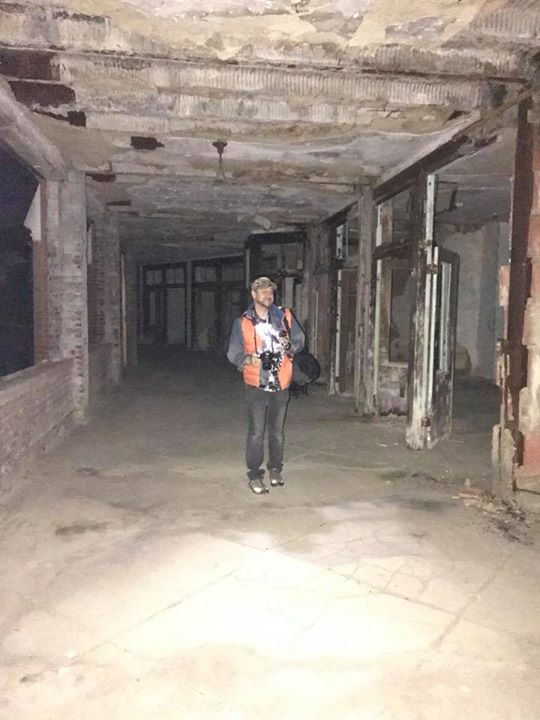 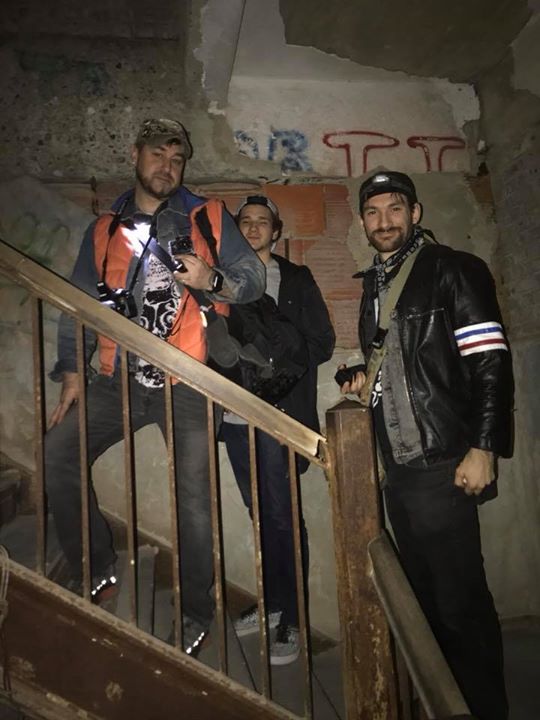 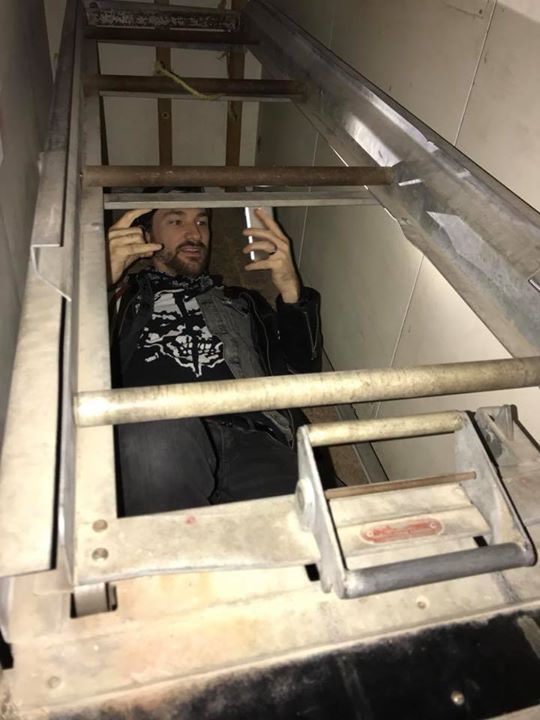 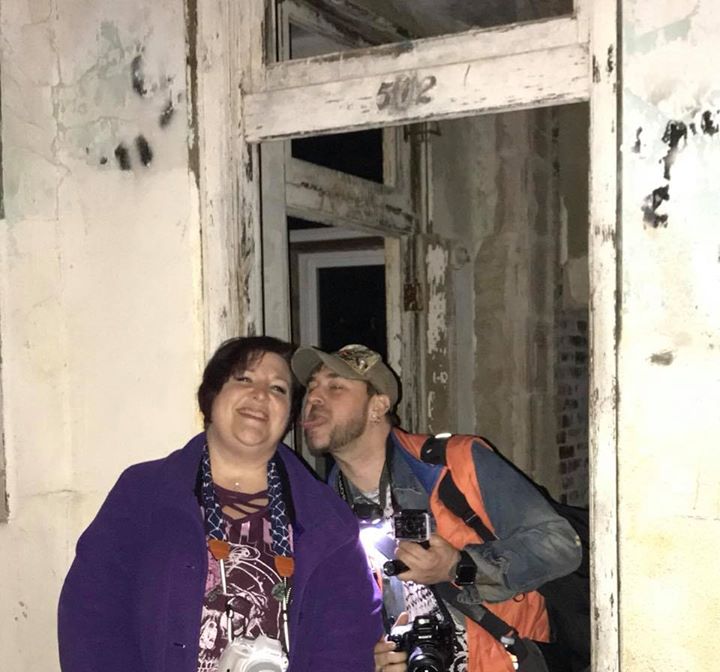 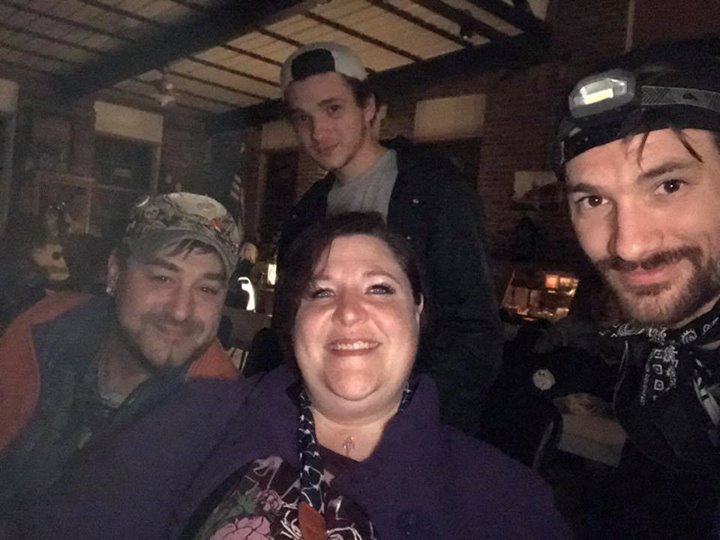 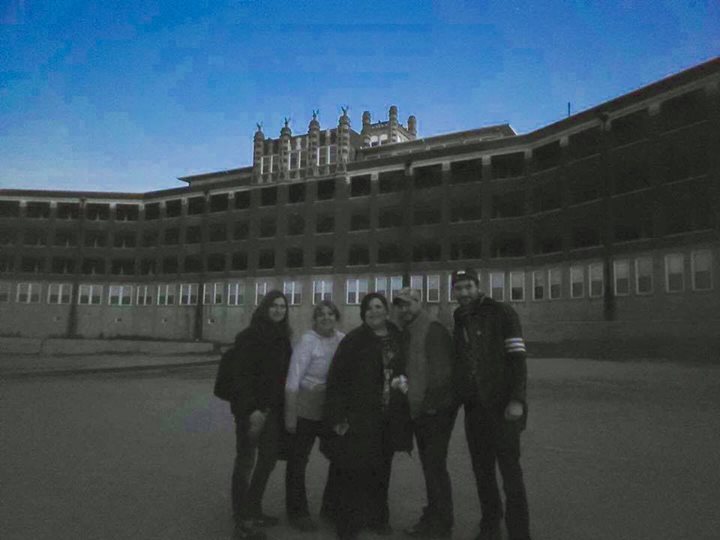 The surprising part was that for the number of people on that investigation, they divided us up pretty well. Over the next seven hours, we switched places at different times and then by the time it was over, it felt like only 30 minutes had passed. I had NO problem staying awake, the only real problem being the amount of walking and stairs one needed to traverse to investigate. Okay, I’ll admit it, being as out of shape as I am, it was quite challenging. Nick and Michael both climbed into one of the body drawers in the morgue, if you can believe it. We video recorded Nick’s experience in the drawer for about fifteen minutes, while we did an EVP session in the old theater.

Experiences: Well, I have to say I didn’t have too many things of note happen. I thought I heard a little girl calling but decided it might have been an extremely loud owl instead. One nice thing was that we had one section to ourselves for a while, down at the body shoot. This is a long tunnel they made to cart the people who died down to the morgue so that the other patients wouldn’t see them. Creepy, right? Since my knee was hurting, I didn’t walk down to the bottom with everyone else. So, I stayed up at the top to do an EVP session all by myself in the dark-- which was pretty impressive in itself.

It was quite a long way down, and as sound carried, I could hear them pretty well. They had some exciting experiences down there, one being they thought something might have been manipulating some plastic at the very end. Where I was, I did not see or feel anything. I admit, I still have not gone through all my recordings yet, but I hope I did record something in that area. So, all in all, Waverly Hills is a fantastic place, and I am so happy I finally got to investigate it even if there were too many people. I want to go back on a weeknight; hopefully, it will be a lot smaller crowd.

We were planning on going to Bobby Mackey’s the next night, but I’m sad to say they only do investigations Sunday through Thursday. Next time we will try to go there again. I have been to Bobby Mackey’s once before and had a fascinating thing happen while using the thermal imaging camera: I saw what looked like a greyish, hunched over figure glide quickly across the camera’s screen.

Hurricane Mills, Tennessee, home to Loretta Lynn, music star, was up next. It was like we stepped into the 1970’s when we pulled up to her plantation. If you’ve seen the movie, Coal Miners Daughter, you’ll have a bit of an idea of what it looks like, as the house we toured was featured in that film. Fascinating to see in person, the kitchen was built to film Crisco commercials from the 1970’s. Also included in the plantation tour was an exact replica of the home she grew up in, and we got to see her tour bus. Fun fact: Ms. Lynn no longer lives in the house we toured; she moved into a new house built for her in the backyard.

Beyond the history and famous connections, we chose this location as a stop for its famed hauntings, as chronicled by a few television shows. It was great because even though we took the regular tour, our excellent tour guide told us all the ghost stories. One of the ghosts is supposed to be one of Loretta Lynn’s sons who died on the property. There have supposedly been apparitions of slaves, civil war soldiers, a woman in white, and a few more all over the property. I am not a fan of country music, but she has my respect for helping to make a lot of positive changes for the women’s movement. I also got to see her cat do his business and cover it up, complete with pictures. Haha.

Our stay in Bardstown, Kentucky was also a lot of fun. We stayed in the old Talbot Inn, which had some ghost stories of its own as well as the Jailer’s Inn—an old jail in Bardstown also used as a hotel. We did EVP sessions in both places as well as the little Cemetery in back. 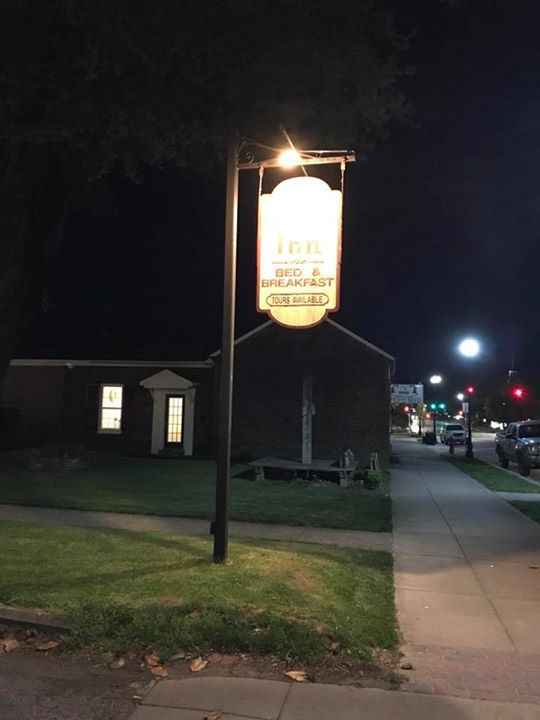 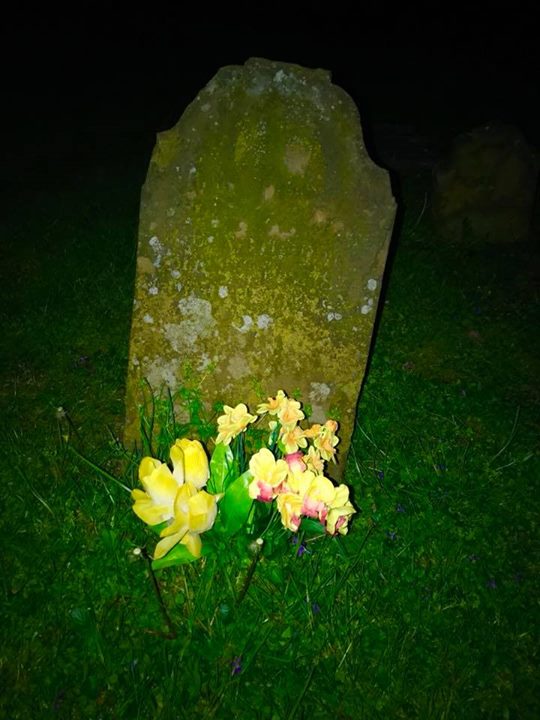 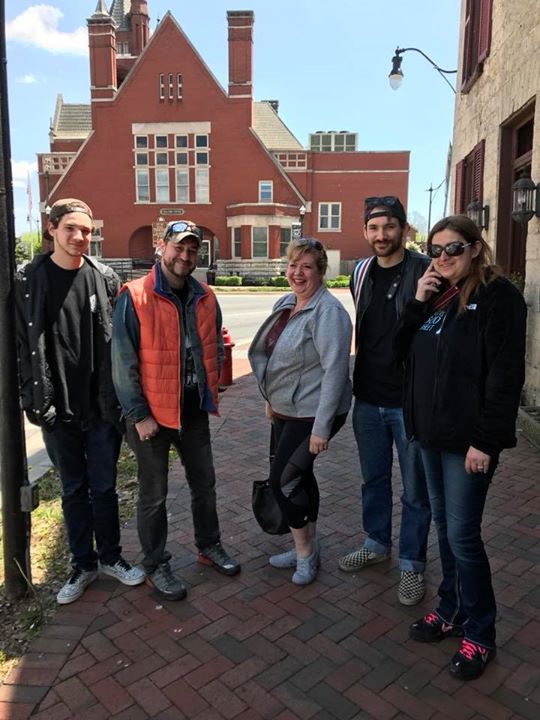 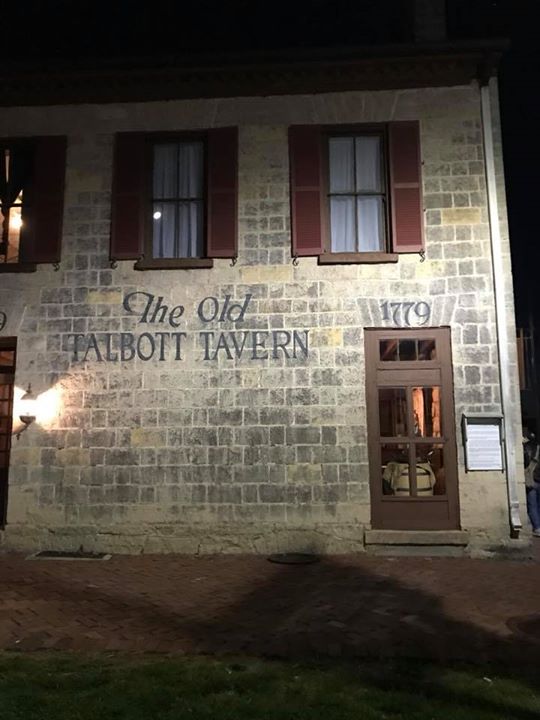 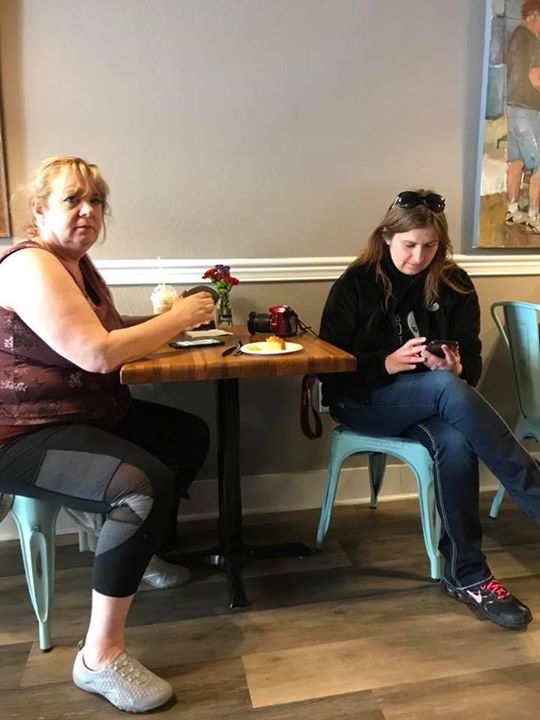 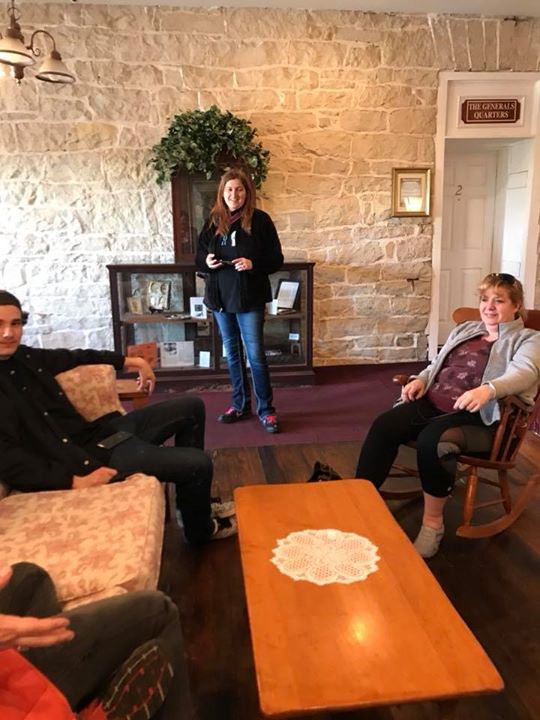 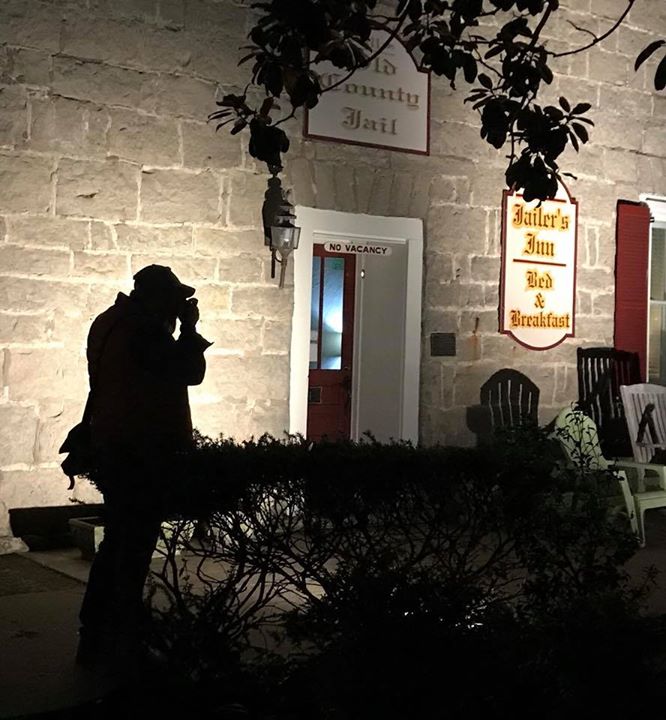 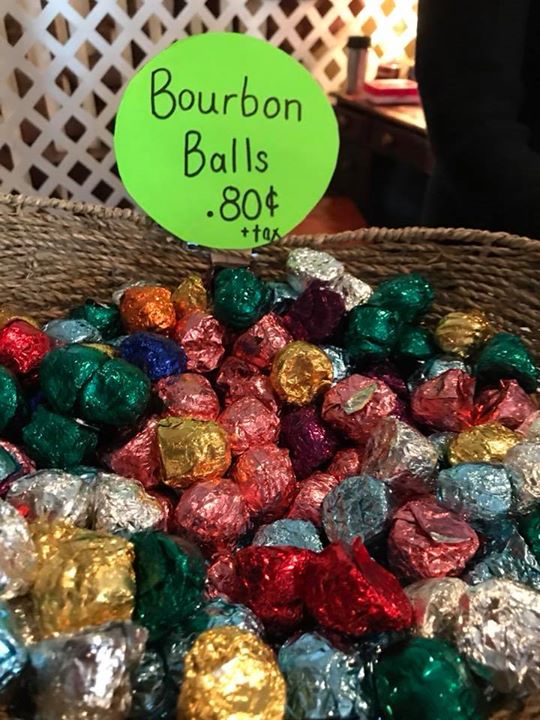 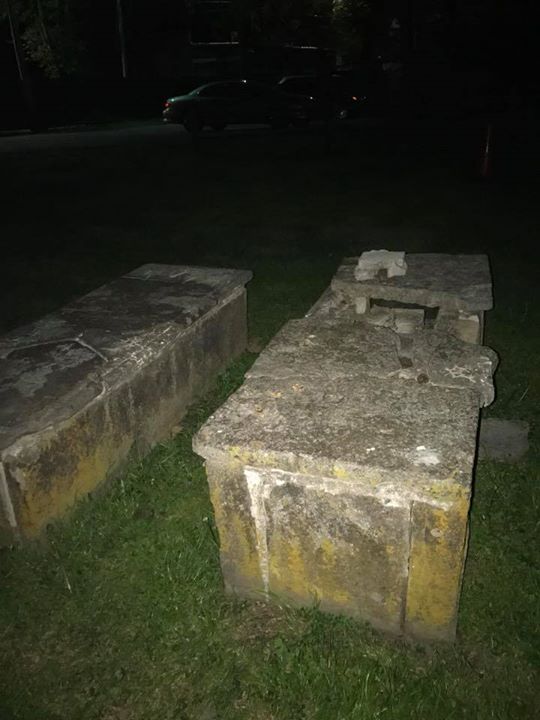 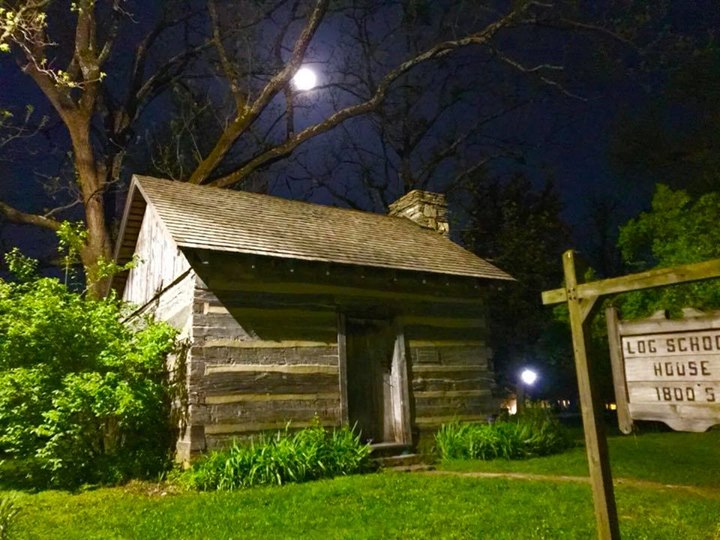 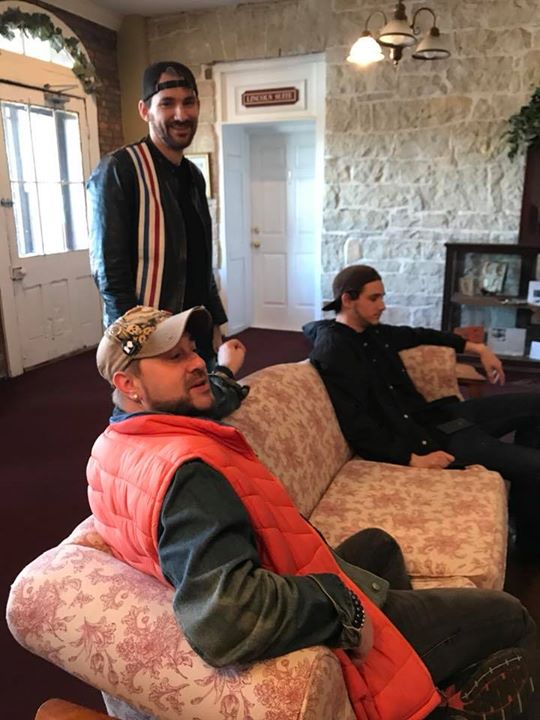 Speaking of little cemeteries, we made a trek out to the Casey Family Cemetery near Vine Grove, Kentucky. There have been many stories about the place being a meeting area for Satanists. A true story is that they found a lot of dead and mutilated dogs and cats there. It is said a group of people raised a demon that dwells in this abandoned cemetery and the souls of the children are being kept there by this being. Further, it’s rumored that if you do not bring them a toy or something to appease them, your car won’t start. To make this story even eerier, there used to be an abandoned car in the cemetery down by the woods that had at one point been set on fire. We went down into the wooded area and did an EVP session there.

Overall it was very eerie, especially knowing some of the real activity that happened, like the animal sacrifices, which makes me extremely sad and angry. It had a strange vibe further enhanced by the toys that were left behind. It was also definitely out of the way. Thank God we did get a cell signal, so a cell phone tower was close by at least. 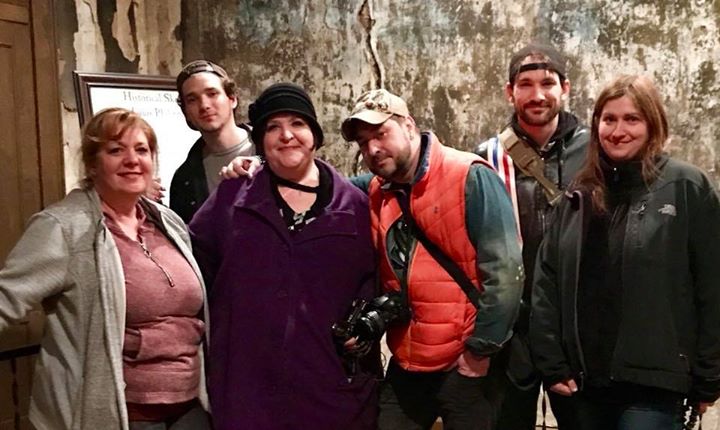 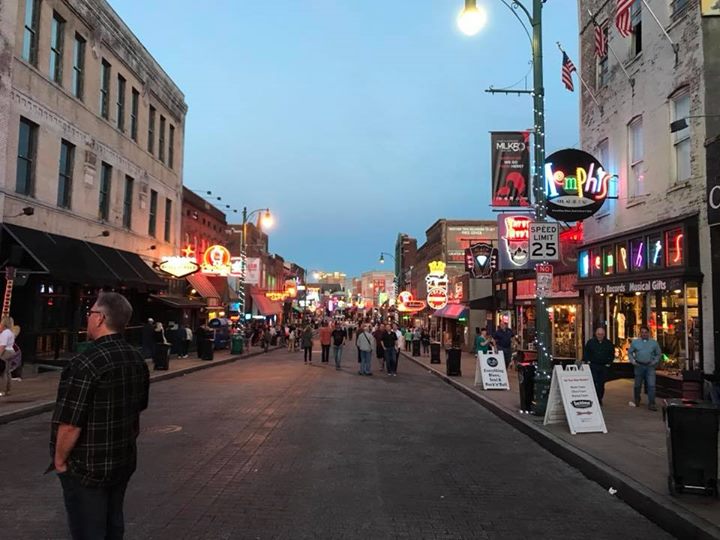 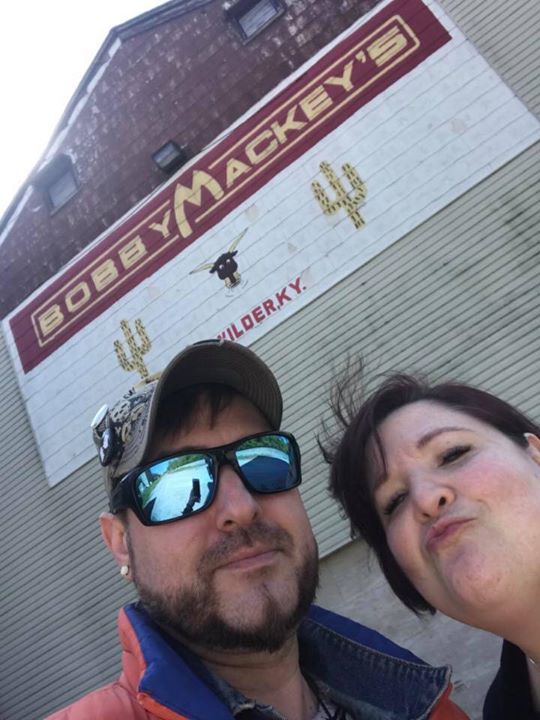 Many of us headed back home to Seattle after our stop at Loretta Lynn’s plantation, but Ross, Michael, and Nick proceeded on to New Orleans. Don’t worry, we’ll bug him about writing a blog about that experience too.

All in all, the trip was a lot of fun. I got to know everyone a lot better and had a great time. I was still extremely sad that our friend’s Mark and Aileen could not make it this year, but am excited to see them next year. Our haunted road trip was incredible, and I can’t wait for the next one!

Library Ghost Talks - Travel on the Spooky Side